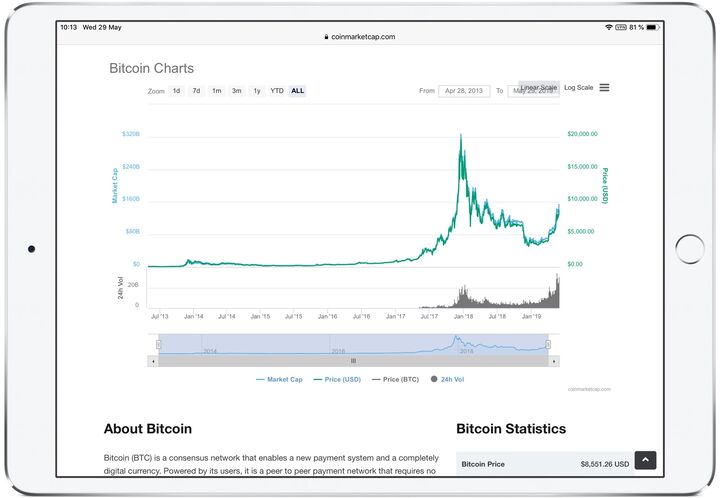 Last year, after an incredible climb in 2017, the price of Bitcoin against the USD fell by more than 3/4 of its highest price. It probably scared many of the investors hoping for a quick win. After hitting a low-point in December, it started a slow climb. On April 2nd the price jumped 15 percent. Since then it has been mostly up. Yesterday the price reached 8,713 USD, which, from its low point on December 15th, makes a 170 percent rush.

An interesting thing, I think, is that the trading volumes are higher now than when the price peaked in 2017.

Interesting! Does this mean that Bitcoin is now less of a risk as it is less volatile?

Also, with regard to trading volumes, I assume that simply means that more people are trading it now than before?

No, I definitely don’t think of it as less risk. As an investment for your retirement I would advice against it. As an “insurance” against a financial end of the world and a fun “spice” in your portfolio, maybe. 🙂

About the volumes, I can’t say if there are more people trading or if they just trade in higher volumes.

Wow! Any reason for such an ongoing positive trend? Is the confidence that was once there returning?

It’s been like this since its beginning. Steep climbs and then heavy falls, but in the long run up. It may be traders pushing it, I don’t know.